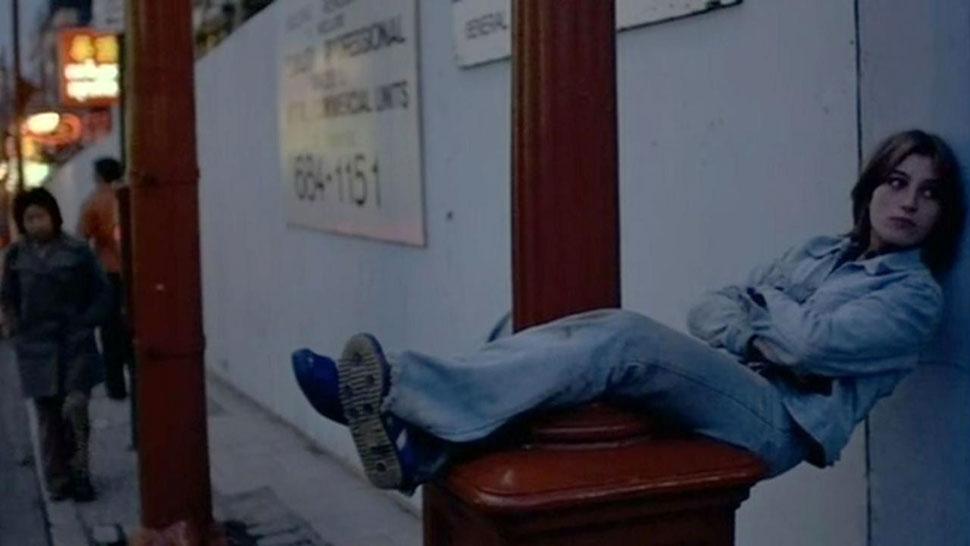 Dennis Hopper has made a career of playing characters with a deep sense of sadness and frustration in their core. It is a charisma that is unique to Hopper, who always came with an attitude ready to rattle both the movie and the viewer. My first impression of him was when he played one of the scariest people I have ever seen in a film: Frank Booth in Blue Velvet. It is a loud, commanding performance that really struck me at age 15, since I was just as scared of him as I did find him funny. As Booth, Hopper feels as though he knows the character even better than David Lynch does. While Blue Velvet can be considered his most iconic performance, he started the ’80s with his third directorial effort, the tender Out of the Blue.

Don (Hopper) is an alcohol truck-driver who crashes into a school bus, killing children and sending him to jail for six years. His daughter, Cebe (Linda Manz, the soul of the movie), is a punk teenager who combs her hair with shoeshine and wears a leather jacket, impersonating Elvis. Her mom, Cathy (Sharon Farrell), is a waiter in a small town; she tries to reconcile with Hopper after he leaves prison, but has been eroded by her drug addiction. This trio is reunited when Don gets out of jail, trying desperately to hang onto both a job and fatherhood. The real tragedy, however, is the fact that Don’s absence has clearly left Cebe without a notable direction or identity.

Out of the Blue isn’t defined by its location. It was shot in Canada and fits neatly into Vancouver’s punk scene in the ’80s, but this feels like a tragedy that can happen anywhere. Nor does this feel like Hopper masquerading Canada as America. The movie communicates a sense of damage by just spending time with Cathy and Cebe alone without Don there. Even upon his return, Hopper is too intelligent of a filmmaker here to believe that the dad coming back into his family’s lives would correct all wrongs, and the reunion celebration doesn’t last. There really is a sense of fate here; this is the only direction these characters could be going, and not even the Neil Young needle drops can lift their spirits.

The movie has an inherent sadness at its core, with Cebe and Cathy forcing themselves to wear a mask to continue to go through their lives. Cebe has her own coming of age story; in the middle of having to raise herself, she is really a scared little girl underneath the punk rock exterior. Cathy tries to keep her job as a waiter at a nearby diner while battling drug addiction and cheating on Don with his friend, Charlie (Don Gordon). It is a family trying to find a purpose or guidance, and Don doesn’t help with either. Hopper knows that Cebe is really the heart of the film, as there is temptation and violence in the world. As the poster’s tagline says, “She’s 15 and the only adult she admires is Johnny Rotten”

It’s unfortunate to see just how unloved Out of the Blue was when it was screened for the Cannes audience in 1980. Its competition that year included Jean-Luc Godard’s Every Man for Himself and Hal Ashby’s Being There, with the Palme d’Or eventually going to Bob Fosse’s All That Jazz. Critics liked it a lot at the time, though it’s wonderful to see this film receive even more worthy love 42 years later. The film is just as melodramatic as it is raw, with Hopper telling the heartbreaking story of a family trying to move beyond an unspeakable tragedy. We still don’t know if they’ll be able to, but at least they have each other

New restoration!
Screens at the Brattle 5/13 through 5/18 – click here for showtimes and ticket info

The post GO TO: Out of the Blue (1980) dir. Dennis Hopper appeared first on BOSTON HASSLE.