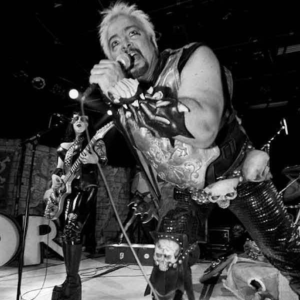 You might have caught him performing one of his many shows in Brookline at Coolidge Corner. Perhaps you saw him winning Mr. America in New Bedford some years before that or if you’re new to the game and want an introduction, you can find a career’s worth of accomplishments spanning from movie production to screenwriter to singer/songwriter. I myself began following him after sparking an obsession with one of his classics, “Rock and Roll Nightmare.” Either way, it is undeniable that Jon Mikl Thor is a force to be reckoned with and has dipped his proverbial toe into a wild array of industries throughout the span of his career. Although he’s based in Vancouver, BC, Thor has a passion for the Boston area that has kept him coming back throughout the years.

Inspired by the unbreakable strength of classic superheroes and mythological gods like Hercules, Thor forged the power of metal rock with the intensity of sports and bodybuilding to create his superhuman character. Zeppelin and Black Sabbath set the metal stage however it was the hypnotic character performances of bands like Kiss and Ziggy Stardust that launched him into the stratosphere. Bending steel with his teeth and popping hot water bottles were just some of many feats of strength.  Legend has it that he once broke the stage while lifting a 500-lb man out of his chair with the strength of his neck.

With regard to film, Thor’s most recent project is the upcoming release of the 2022 film, “Pact of Vengeance.” This movie is about a biker gang taking over the city and shaking down businesses for money, including that of a previous special forces commander, who in turn rallies former military agents to serve up some vigilante justice. Highly anticipated, this will be coming out within the next few months. Apart from “Rock and Roll Nightmare,” the documentary, “I am Thor,” is one of my personal favorites. This film chronicles the life experiences and evolution of Thor over a decades-long career and gives the viewer an inside look into his craft.  Thor has also traveled all over the world, performing at both small venues and larger productions, and has released twelve albums over the course of the years with his most recent being 2021’s “Alliance.” Its lead-off track, “We Need Musclerock,” is a heavy metal nod to the Muskelrock in Sweden, a rock festival in which he has been a regular headliner.

Accomplishments and record breaking endeavors aside, Thor is one of the kindest people I have ever had the pleasure interviewing. He injects passion and purpose into every venture and his larger than life presence is complimented by a down to earth vibe. I find his outlook is inspiring, his drive infectious. His legacy is simple: transcending worldly limitations through the immortality of rock and roll.

The post “All Hail the God of Rock: The Life and Legend of Jon Mikl Thor” appeared first on BOSTON HASSLE.