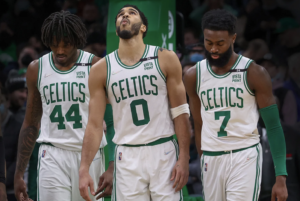 Diehard basketball fans should have seen this coming. Golden State showed why it doesn’t go well betting against a champion on Thursday night. Why when 538.com posts we had an 87% chance of winning before the series started, you wince.

When Boston jumped out to an early run with the crowd going crazy, the Warriors absorbed that and weathered the storm. This Boston Celtics team deserves all the accolades for turning around this season. For outlasting Eastern Conference juggernauts Brooklyn, Milwaukee and Miami. However, as strong as the East was this season, nothing has been close to the pressure this defenses had to commit to the greatest shooter in NBA history.

This series was over in Game 4, when the younger and less experienced team had shots at taking a 3-1 lead. Missed opportunities will be the memories Celtics players want back in the coming months.

In my opinion, some off-season goals should be to improve on scoring from someone outside Jaylen Brown and Jayson Tatum. Marcus Smart and Derrick White are good players but can’t be relied upon to score consistently. Al Horford is 35, so how long do we expect him to continue his production? Where does the ball go when top teams take away Brown or Tatum’s strengths? Gotta figure that out. Speaking of strength, Jayson Tatum needs to continue to fill out his body to be ready for the physicality of the late May and June basketball he watched Kobe Bryant excel at. His time will come, but those Game 5 air balls felt reminiscent of a young Bryant on sea legs against Utah in 98. Last, Robert Williams III health is a key factor on how long the window stays open to win banner #18 with this current core. His rim protection already is top 3 in basketball and his ability to catch lobs unlocked a facet on offense past Celtics’ teams haven’t had. Isiah Thomas posted he “heard that before lol” when it was tweeted that Williams was assured his surgically repaired can’t get worse from playing. If Williams isn’t the same, then the Celtics would need a guy who could replace Williams strengths? Maybe a Rudy Gobert trade?

The post Played with House Money and Lost appeared first on BOSTON HASSLE.