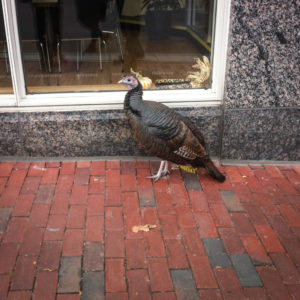 One of the great glories of Cambridge, Mass. is its population of wild turkeys. Ever since I was a kid I’ve thought of them as indicating something specifically Cambridge.

But I’ve also noticed there are more and more of them every year — an upward turkey trend. And the more they multiply the more I realize that they aren’t just something that fits, anecdotally, into the character of the city. Rather, they’re their own entity, intent on strutting, reproducing — things specific to the ambitions of a turkey. They don’t just aim to fit in.

Fitting in is tricky when it comes to human-animal relations. Take this example: Not long ago, a turkey became a regular of a Somerville pizza shop. He would stroll in and get fed, and everyone got a kick out of it. He was the subject of an Instagram fan page. Then he got combative, the novelty backfired, and Animal Control had to put him down.

Male turkeys, called toms, can weigh up to 25 pounds, and can sometimes get aggressive during mating season (February and March). They love shiny objects, which means that sometimes they’ll stand in the middle of the street, transfixed by a hubcap. Sometimes they will try to fight their reflection in a store window. These behaviors are at odds with the intended uses of hubcaps and store windows.

As the world is increasingly engineered around human uses, we are to experience more and more of this dual power: an interval wherein the same architectures are used by different creatures, to different ends. And it seems to me that we humans are to blame whatever frictions arise.

I’m referring here to the arc of anthropocentrism, and for the Cambridge turkey we can begin this narrative with the arrival of the Mayflower.

“They love shiny objects, which means that sometimes they’ll stand in the middle of the street, transfixed by a hubcap. Sometimes they will try to fight their reflection in a store window. These behaviors are at odds with the intended uses of hubcaps and store windows.”

Settlers arriving on the Mayflower in 1620 saw the turkey — a big, awkward, flightless bird — as the perfect game, and hunted them without any restraint. This wasn’t just because the settlers were hungry and bad at farming, but because turkeys brought in a decent fee at the market and, I would guess, offered some kind of laugh.

Classically, settlers accessed the unknown with a blind aggression. When Christopher Columbus arrived in the Caribbean, for example, he celebrated his “discovery” of the friendly monk seal (who, as of then, had no reason to fear humans) by slaughtering seven of them.

When these settlers disembarked the Mayflower, there were 11 million turkeys on the continent. By 1851, the last wild turkey in Massachusetts had been killed.

Now we jump ahead to 1972, when conservationists took up the cause of re-turkeying this state. First they took some turkeys from New York state and installed them in the Berkshire Mountains. It worked; they reproduced, and then the turkeys were spread throughout
Massachusetts. Within my lifetime it was relatively uncommon to see a turkey. Their comeback has been exponential.

It’s great that this happened — that the conservation movement as a whole happened. The intervention of things like Rachel Carson’s book Silent Spring and mainstream ecology have done a lot to unseat the extractive impulse of ecological colonialism. But it’s still part of the anthropocentric arc — where humans are justified as the world-builders and decision-makers, and animals are still the subjects of, and subjected to, us.

With a current population of 7.8 million, North American turkeys are gradually getting back up to their pre-settler counts. But that’s not the only reason why there are more of them in Cambridge than ever. As the human impact on the environment intensifies (against the efforts of
the conservationist), more and more animals are finding their way into cities and towns.

Evolution: a fortune that favors the bold? Not universally, but often. The reason anything even walks on land today is because some brazen seaborne animals, millions of years ago, thought to dip their toes outside of the overcrowded waters.

For rural animals, Big Agriculture’s trend toward monocropping has made it harder to eat. In increasing numbers they’ve done something almost totally antithetical, totally against their inborn impulse, and moved closer to human population centers. In this new environment they take on lives suspended somewhere between wildness and domestication, revolving around humans and their architecture without inheriting our semiotic system. There is an instability in this shift — a reconstitution nipping at the heels of the anthropocentric arc.

“The turkey speaks to something forward-thinking about Cambridge: a city of possible cohabitation.”

When animals take on a dependency on human resources without succumbing to domestication, they can qualify for the moniker of “parasite.” Parsing etymology, one finds that para/sitos means beside/the food source in Greek. As the fable goes, the parasite is a character who gets to sit at the feast eating food that isn’t his, because of some sort of charisma or flattery he’s offering — in other words, a kind of symbiosis.

But in common idiom the notion a parasite does not elicit any exchange. Instead it’s considered to be a creature who takes what isn’t his, who
unjustly sucks its resource dry – metonymically, the leech. But wouldn’t colonist be a better name for such an impulse?

The turkeys in Cambridge never seemed to have been inaugurated into urban parasite logic by following the rubric of the rat or the pigeon. They don’t shift around, abashed, looking precarious and ashamed. Quite the contrary. My dad recently sent me a video of two toms parading down Central Cambridge. They were puffed up with their tails fanned, doing a mating ritual called the strut. When they strut, their heads glow bright red against their iridescent violet coloration. Around them were ten or so female turkeys. It was a weird and wonderful sight.

At their worst, the turkeys are flagrantly violent, hierarchical, and “maybe suicidal,” as a Somerville friend put it. Rather than slipping below the infrastructure, they traipse right over it. Sometimes that means that a pedestrian gets chased down. Sometimes it means they use main
streets as their pickup line.

The last time I was in Cambridge, several male turkeys stood outside a deli. I hadn’t remembered them standing so brashly, in the middle of the sidewalk, before the COVID-19 pandemic. Locals ignored them, but I stared for a while, and stupidly offered some food on the ground in front of me. That got them worked up, and before long they were uncomfortably close, craning their necks and staring with impenetrable eyes. It made me nervous: a stagnant, lawful parasite was one thing, but this was a serious display of autonomy. How long until the anthropocentric impulse dropped down its heavy hand and nixed our cohabitation?

It seems that turkeys like the same things about Cambridge as do people: trees, quiet streets, a safe place to raise their kids. Many of the conveniences we’ve devised for ourselves apply to them as well. And we’re not even made to compete over resources.

I have two answers.

The first answer is of an existential quality. That the turkey necessarily says something about Cambridge. By the historicist tack, it squawks out some ode to Benjamin Franklin and the Thanksgiving myth — a self-consciously embalmed history with economic motivations. But as we’ve learned, the turkey is no friend of the colonist.

On the contrary, the turkey speaks to something forward-thinking about Cambridge: a city of possible cohabitation. A city that’s granted the turkey protected status. A city whose animals are healthy and agetic, not just herds of feral cats and cockroaches. The Cambridge-turkey kinship signals the potentiality of Cambridge as a conscious harbinger of the ecocity.

In a Wicked Local interview with Cambridge Animal Commission Director Christina Correia, it’s evident that, as long as the turkeys aren’t attacking people, they’re invited to partake in and benefit from the city. The turkeys have “become more and more adaptable to people and city life — and in the city’s busier areas,” Correia says, adding that when the turkeys find themselves in trouble, her commission gladly comes to their aid.

However, she notes that most of the calls about turkeys are from people who are startled by their presence and assume them to be
misplaced. Strangely, in such instances, it’s the Animal Commission — the authorities — who get it more than anyone: the turkeys belong here, because they’re here, and so they’ll stay.

Which brings me to my second answer.

What’s the use of a Cambridge turkey?

This is exactly where emancipation from the anthropocentric arc lands. The turkey is a parasite that rises to the occasion, that meets us at all our bombast and instanstance, that is big enough to stare you in the eye and weird enough to shake you out of paradigm. As Jacques Derrida details with his cat, there is a mutual recognition that occurs when human meets animal in the nakedness of
domestic space.

It’s in such moments that the turkey is just there — not as a symbiotic force, mnemonic device, revolutionary symbol, or pest — but just as another thing that lives and eats and shits.

You see, human is not a fixed category, but an unstable ideological marker that must constantly be struggled into existence. The theosophy of the turkey tells of how the compulsions of the anthropocentric arc can spill outwards. in this case, it externalizes its identity crisis on these
indifferent birds, first by annihilating them, and then by sciencing them back into existence.

All the same, today Cambridge’s 50-odd turkeys are finally left to just be, and one of my favorite things about Cambridge is being their neighbor.

The post Welcome to Turkeytown appeared first on BOSTON HASSLE.