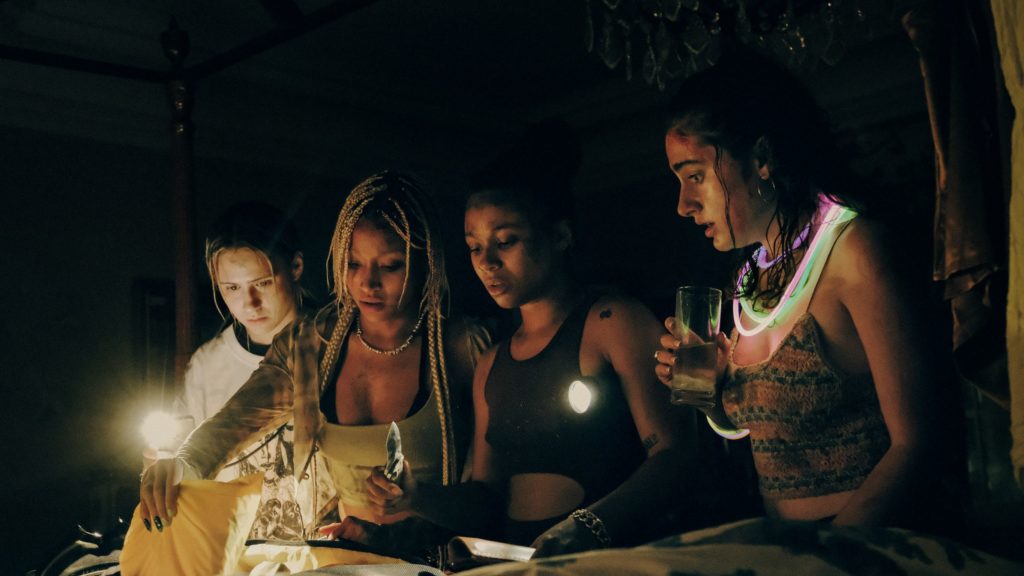 Thanks to such high-minded hair-raisers such as Hereditary, The Witch, and Under the Skin, few studios are more closely associated with the controversial “elevated horror” tag than A24. If their 2022 output is any indication, however, one gets the feeling that the studio may be sensing a shift in the weather and subtly changing course. Putting aside for the moment Alex Garland’s Men (which I liked well enough, but is so “elevated” that it borders on self-parodical), consider Ti West’s X. X represents a strain of horror which has been notably absent from the genre over the past decade in the mainstream and indie realms alike: raunchy, campy, and soul-satisfyingly gory (ironically, West helped usher in the elevated era over a decade ago with his slow-burn classic The House of the Devil). The same can roughly be said for the studio’s latest horror offering, Halina Reijn’s Bodies Bodies Bodies, which takes the familiar tropes of the dumb-teen slasher movie and transposes them against the developing tics and anxieties of Generation Z. The results will surely not be to all tastes, but those who can get past its of-the-moment buzzwords and references will find a smart, tightly-written black comedy with a surprisingly strong emotional core.

The setup is pure cabin-in-the-woods pick-em-off, with a few canny tweaks. Sophie (Amandla Stenberg) takes her new girlfriend Bee (Borat Subsequent Moviefilm breakout Maria Bakalova) to the remote family mansion of childhood friend David (Pete Davidson), who has arranged a wild party in the face of an impending hurricane. Quiet and shy, Bee finds herself in the awkward position of navigating the various relationships and tensions among the friend circle: David’s girlfriend Emma (Chase Sui Wonders) questions why Sophie would show up unannounced with a plus-one; Sophie’s intense ex Jordan (Myha’la Herrold) asks Bee if she knows what she’s getting herself into; and ditzy Alice (Shiva Baby’s Rachel Sennott) raises eyebrows with her own guest, new boyfriend Greg (Lee Pace), who is at least twenty years her senior. To break the ice, Sophie proposes a round of “Bodies Bodies Bodies,” one of those secret-killer party games which inevitably raises simmering tensions to a boil. Just as inevitably, the game spills into reality, as bonafide dead bodies begin popping up. Their numbers dwindling, the friends set out to figure out who is the actual killer– and who’s just a toxic, gaslighting manipulator. 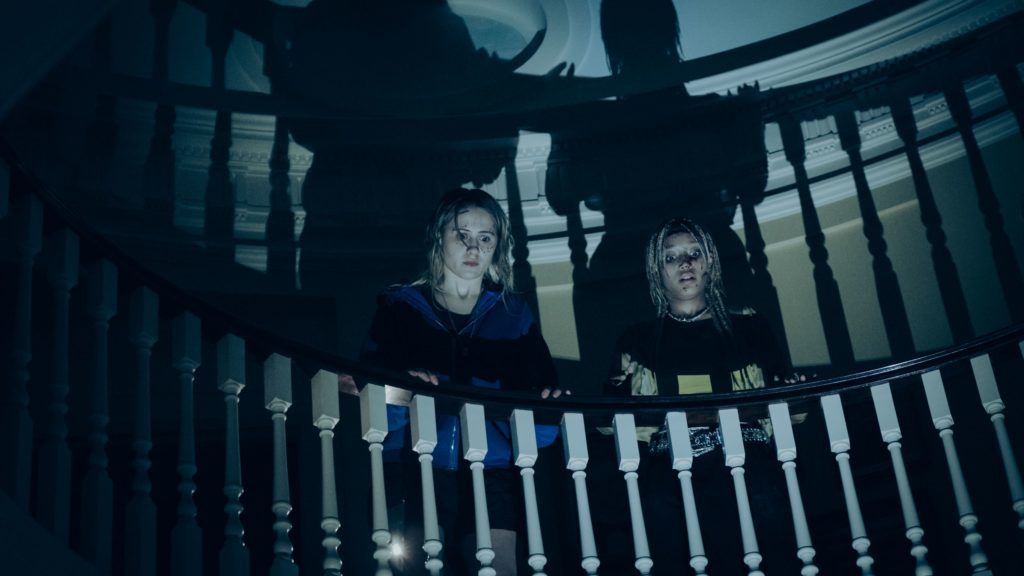 The ads for Bodies Bodies Bodies market it as a sort of Zoomer-era Scream, and to some extent I suppose it is (of course these girls keep splitting up in a dark house– all the video stores are closed, after all). But Bodies can be more precisely classified alongside such “awful rich people dying in a mansion” comedies as Ready or Not or You’re Next (all of which share a common ancestor in Agatha Christie’s blackly comic And Then There Were None). The characters on display are caricatures, embodying the narcissism, nihilism, and pop-psych rationalization that has come to define the younger generation (Reijn, it’s probably worth noting, was born in 1975, and views them through the jaundiced lens of Generation X). There is a grimly funny satisfaction in watching these twentysomethings begin to drop; it’s not that they deserve it, necessarily, but they meet the sorts of ends one might find themselves morbidly fantasizing when someone just won’t shut up.

And yet, almost without fully realizing it, I found myself caring about these characters in spite of myself. Much of the pathos hangs on Bakalova, fresh off her surprise Oscar nomination for Borat (she deserved it, and probably should have won a Congressional Medal of Honor for her scenes opposite Rudy Giuliani alone). Bakalova was wild in that film, obviously, but her performance would have been mere performance-art shock had it not been for the sweetness and vulnerability the actress brought to the character. Here, Bakalova inhabits the painful awkwardness of the perennial outsider amidst a deeply enmeshed social circle (on top of being a literal foreigner), while also feeling her way through a new romantic relationship, and clearly being a fundamentally shy person to begin with. Bakalova is matched beat for beat by Stenberg, who would probably be the “final girl” if this truly were that kind of movie, delivering a soulful, lived-in performance as a deeply flawed heroine. Even as new information brings aspects of both of their characters into question, it’s tough not to feel for these poor girls. Anyone who took Bakalova as a flash-in-the-pan novelty item will have to think again; her performance here proves that she’s more than just a feral comic provocateuse. 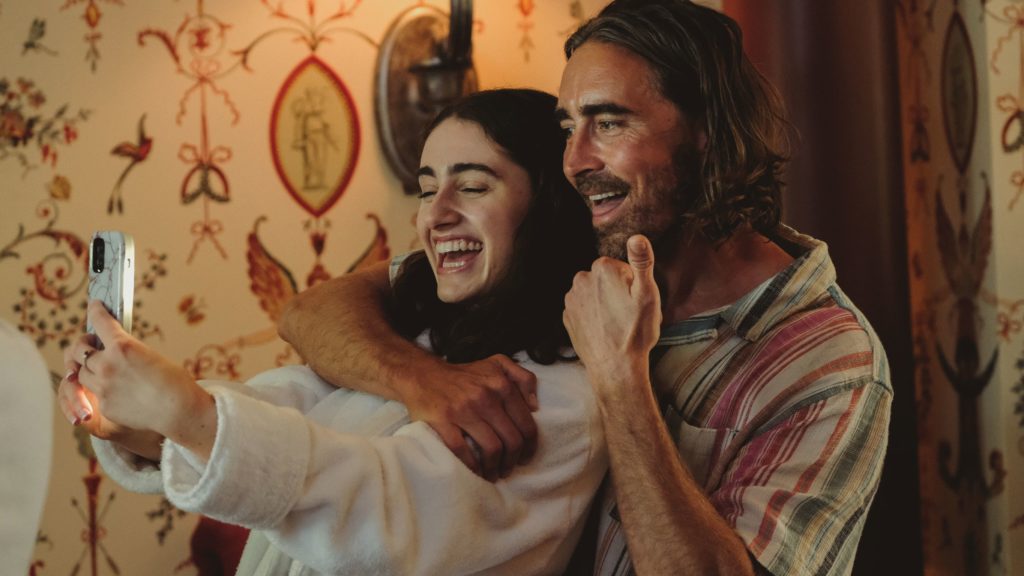 Which is itself somewhat funny, as Bodies is, at its core, a rather broad comedy, built on a strong and well-picked ensemble. The comic MVP here is Sennott, tweaking her self-absorbed character from Shiva Baby down several IQ points into a hilariously vapid party girl (in one of the film’s funniest runners, Sennott’s Alice immediately agrees with every single one of her friends’ pseudo-psychological whodunnit theories, even the ones that contradict the other ones). Equally funny is Pace, perfectly embodying exactly the sort of laid-back, ambiguously sleazy himbo who would see no issue partying with a bunch of nubile twentysomethings for a weekend. Really, the only odd man out here is Davidson, whose unlikely tabloid fixture status makes him seem even more out of place among these fresh-faced stars than Pace, but even he’s well deployed as the douchebag you pray bites it first. A good death-mansion movie lives and dies (so to speak) by its cast, and the one Reijn has assembled is first-rate.

It should be clear from the outset that Bodies Bodies Bodies will not be for all tastes; it is very talky (particularly in the last-act monologues, which mark the film’s clearest Scream influence), and I suspect a good portion of the audience will viscerally reject it like an unwanted organ. I myself was skeptical going in, being as I am constitutionally indisposed to the aesthetics and discourse of the influencer set– but damned if it didn’t grow on me. Bodies Bodies Bodies may take the shape of a horror movie, but it’s fundamentally a comedy, and we’re in an odd cultural place where good comedies are considerably rarer than decent fright films. What few contemporary feature comedies get the green light these days tend to be overlong and given to flabby improv, and more often than not get shunted to the streaming wasteland; Bodies, by contrast, is actually written, with well-crafted jokes delivered by a solid cast of actors (the last theatrical comedy I can think of to check all those boxes might be Knives Out– another film about obnoxious rich people in a spooky old mansion, come to think of it). As a horror movie, Bodies Bodies Bodies might be consciously trashy, but as a comedy, it’s– dare I say– elevated.