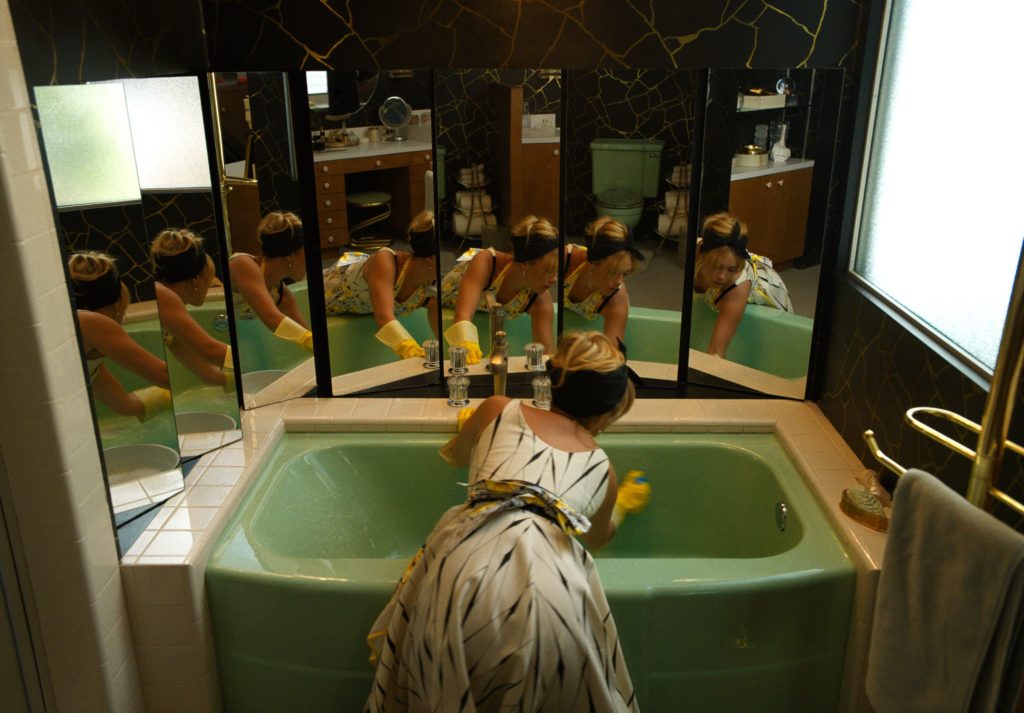 It has been talked about, of course. In the month (has it really only been a month?!) leading up to the film’s release, the constituents of Film Twitter and other gossipy online circles have done their best to parse the various and sundry storylines which have swirled around the film’s production: the (confirmed) relationship between director Olivia Wilde and star Harry Styles; the (alleged) animosity between Wilde and lead actress Florence Pugh; the leaked texts sent from Wilde to ousted actor Shia LaBeouf; the gob of phlegm (maybe) sent from Styles to co-star Chris Pine. I was out of the country with limited internet access when the discourse cycle took off, and by the time I attempted to catch up with it the game of telephone had already lapped itself several times; it felt a bit like tuning into a long-running soap opera decades into its run and trying to figure out who all of these characters are. It’s funny how trivial much online chatter becomes when one takes the view of an outsider.

And anyway, I’m a critic, not a gossip columnist. I’m supposed to dissect the movie itself– which, it must be reiterated, only just came out today– not the air of scandal swirling about it. But I have a feeling we’ll come back to it, because the sad truth is there just isn’t that much to the film at the eye of the storm.

Pugh and Styles play Alice and Jack Chambers, a clean-cut married couple living in Victory, a Levittown-style cul-de-sac in an undisclosed desert somewhere in the American southwest. During the day, Jack works for some top-secret project or other (all the wives are allowed to know is that their husbands work in “the development of progressive materials,” and that this “development” frequently results in earth-shaking explosions), while Alice stays home preparing extravagant meals. By night, the couple mingle with their neighbors (including Nick Kroll, Kate Berlant, and Wilde herself), mixing high-balls and blasting pop standards from their high-end countertop turntable. “Life could be a dream,” the Chords croon from the stereo– and, in Victory, it would certainly seem to be.

Of course, there wouldn’t be much of a movie here if all was as it seemed. When neighbor Margaret (Kiki Layne) begins acting erratically and making cryptic comments (before being whisked away “to the hospital”), Alice begins to question the ostensibly idyllic nature of life in Victory. What, for example, are those “progressive materials?” Why do all of her friends and their husbands have nearly identical meet-cute stories? And what exactly is the true nature of Frank (Pine), the CEO who lords over Victory with an affable but icy charisma, like Jim Jones by way of Ward Cleaver? The pursuit of these answers might cost Alice her sanity– or worse.

First things first: if you’re going to make a film about a repressed housewife breaking her way out of a Stepford-like suburban dystopia, Florence Pugh is absolutely the actress you want to cast. Few contemporary stars are able to do so much with so little. As in her breakout role in Ari Aster’s Midsommar, Pugh is able to pack an ostensibly affectless line read with the searing emotion of a tear-soaked Oscar speech– and when she does break down, the effect is absolutely leveling. I’m far from the first to say it, but there’s simply no one doing it today like Florence Pugh, and I can’t even begin to guess how far her star is going to rise over the next several years. As a vehicle for a Florence Pugh performance, Don’t Worry Darling succeeds in spades.

As a movie, however… well, that’s where things get dicey. Don’t Worry Darling all but announces itself at the outset as a puzzlebox narrative, and it’s not terribly difficult to deduce the general shape of the solution within the first act. This is not, in itself, a dealbreaker– one can have just as much fun watching a story escalate to its inevitable conclusion as they can getting blindsided by an unexpected twist. But Don’t Worry Darling doesn’t put much effort into building its tension; it hits the ground running in a general state of psychodrama freakout, and pretty much stays there for the film’s entire two-hour-plus running time. Even worse, the big reveal doesn’t bring the big picture into nearly enough focus; several of the film’s driving mysteries remain wholly unsolved, and the answers we are given are muddy and shed little insight to the film’s central themes. It feels at times like pivotal scenes were left on the cutting room floor, while others were abandoned a draft or two short of completion.

Visually, Don’t Worry Darling is a spectacle made for the big screen, its sprawling vistas and wide-angle spectacle no doubt amply filling an IMAX stadium. But the story seems optimized for half-watching on Netflix while glancing at one’s phone. The vibe is there, the ambient sense of watching a cerebral sci-fi mindbender, but the whole thing is oddly listless and unfocused. Alice’s hallucinations have a habit of repeating themselves, while other scenes, such as a nightclub sequence featuring a bizarrely lackluster dance number from Styles, feel disconnected and seem to last forever. (Styles, for all the ballyhoo, gives maybe the sixth or seventh most memorable performance of the film; he is less an actor than a utility, a good luck charm guaranteeing a given number of ticket sales). Those looking for evidence of behind-the-scenes drama will be likely to find it; it’s tough to shake the sense that something went wrong somewhere along the line.

And damn it, there I go again, bringing in metatextual elements when I’m trying to stick to the film. Try as we may, it’s tough to give a film a fair shake when it arrives in such a cloud of bad press and toxic energy. But that’s just the thing: I went in wanting to like Don’t Worry Darling. It’s an original, mid-to-high-budget Hollywood film featuring a number of actors I quite like, and in general I’ll take ambitious but flawed over slick and homogenous and anchored to a slab of IP. But all of its ambition and considerable craft can’t overcome the fact that there just isn’t a lot of movie rattling around in there. It wants to be discussed, but it’s so empty that one can hardly help but circle back to the gossip mill. Wilde is clearly a talent, and I hope this doesn’t mark the end of her career as a director, but Don’t Worry Darling is a misfire, a film so content with the idea of making a statement that it doesn’t end up saying much at all.