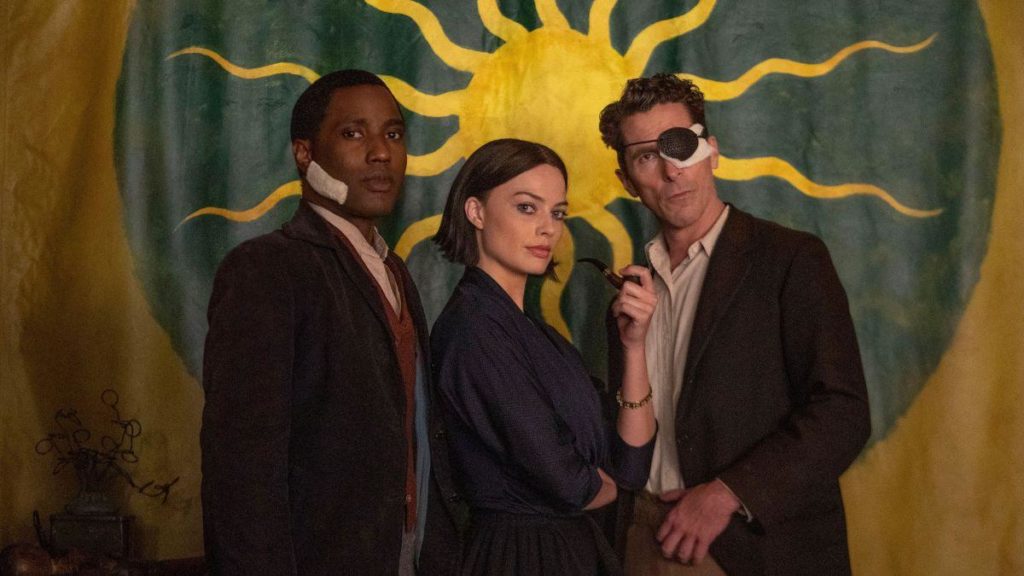 With a trailer friendly ensemble cast, the new action-comedy Amsterdam’s main attraction is its good looks and recognizable faces. Beyond that, David O. Russell’s (American Hustle, Silver Linings Playbook) new film is kind of like a moralizing version of the great political thriller The Parallax View with the quips of Bullet Train. For the majority of the Hassle’s audience, I suspect that sounds like an ill-advised way to spend an evening.

Based on the real events of The White House Putsch or the Business Plot, a political conspiracy that likely escaped your high school history class, the story focuses on the trio of Burt (Christian Bale), Harold (John David Washington), and Valerie (Margot Robbie), who meet in a military hospital in Amsterdam during the Great War. Burt, a half-Catholic and half-Jewish officer, is sent to lead the 369th New York Regiment, the largely Black regiment forced to wear French uniforms because the white American soldiers were too racist to be seen with them. His main qualification for the post was not being racist.

I’m not sure if the war ended or if they go AWOL, but the three of them become best friends, make secret pacts, and sing mad-lib “non-sense” songs as they run off to the Netherlands. Harold and Valerie supposedly fall in love, though their chemistry is so unbelievable that we need a narrator to opine about their unbreakable bond to believe it. The awkward friendship comes to an end when third-wheel Burt returns to the States. Years later, Harold has also returned and Valerie has ghosted both of them for some 12 years. Until, to their surprise, they all three somehow end up intertwined as the prime suspects in the murder of General Bill Meekins.

In addition to the friend triangle of Robbie as the modernist artist and nurse Valerie, Bale as the drug-addicted doctor with one eye Burt, and Washington as the lawyer Harold Woodsman, Amsterdam is stuffed with star cameos of all sorts. From Zoe Saldaña to Chris Rock to Rami Malek to Robert De Niro and everyone in between, if they were an A-list actor with availability between January and March 2021 they’re probably somewhere in the two-hour run-time.

Vox’s Alissa Wilkinson described this casting craze as the “Endgamification” of the movies, though she didn’t necessarily see it as a bad thing or something counter-to artistic merit. I have to disagree, especially in its most parasitical attempts like Amsterdam, which may have well been cast by a marketing team than a filmmaking one. The appearance of each star-figure works like a gif-able moment, primed and ready to go for Tik Tok and Instagram reels. When we first glimpse Anna Taylor Joy (yeah, she’s here too), the camera starts at her feet and with a slow tilt up reveals the ineffable Joy. Her appearance was just one of several to earn applause from my audience, who also cheered or gasped for De Niro, Malek, Taylor Swift, and even Timothy Olyphant—though, I won’t lie, I was very happy the latter received a reaction. It’s a comic-book moment in a non-comic book movie—and that’s not an artistic-cultural turn that I’m prepared to welcome with open arms or an open wallet.

The Marvelization of the movie extends beyond the casting decisions. Like Bullet Train and pretty much every Marvel movie post-Guardians of the Galaxy, the writing is almost defined by its quippyness. Most characters have a quirky interest or character trait that’s supposed to be funny while also telling us how they envision the world on a deeper, more philosophical level. Thomas and the Tank Engine was a guiding moral compass in Bullet Train and bird-watching works to the same effect here. It’s not that I think singular, overwhelming character traits are an irredeemable character structuring device. The problem is the star ensemble of the cast de facto imposes such storytelling conventions. Anna Taylor Joy isn’t going to play a blank-plot device character with four minutes of screen time. Chris Rock’s not going to not be funny. No, each character needs a memorable “character trait” that ekes out at least one Tik Tok-able moment. There are few true “side characters.” Rather, minor characters rotate who gets to be a major character for a moment, much like a TV sitcom or an original high school play.

Fortunately, I found Amsterdam funnier than the aforementioned locomotive-based action-comedy. Even still, it never slows down enough to let viewers feel the weight of fascism and that’s a problem. There’s even a distasteful and unnecessary quip in the film’s coda about the Gestapo. I’m not even sure it was meant to be funny, but people in my screening chuckled, and I imagine they did in test screenings too.