I recently went to Dublin with my best friend. I dragged her through every record store in town, searching the racks for the one souvenir I sought – a local punk or powerviolence tape. At one such shop I asked the young man behind the counter where the powerviolence could be found… he replied asking “who is powerviolence.”

Though I was nonplussed by his seemingly astounding ignorance, I must admit the genre is not one of incredible reputation outside of its dark corner in hardcore’s vast underworld. I simply spend my life submersed in it. 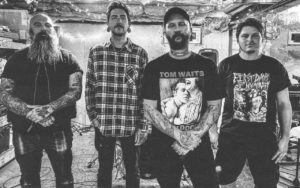 If I’d had the time, I’d have made him listen to some tracks, likely starting with genre royalty and personal favorite: Wound Man. I remember them coming up on my playlist as fed to me by the algorithm. At first listen I could only assume they hailed from California, like genre paragons Dead City and Spy. I was surprised to find New Bedford, Massachusetts, of all places, to be their home.

New Bedford was once my home too; I’d grown up there. So perhaps I should have known. The proud, tough sea-town known for its massive hand in the fishing industry is the perfect breeding ground for the brutality for which the genre is known. At least, it certainly made me and my peers amenable to it. I once posted a track from Wound Man to my social media and received the loving reply “This makes me want to beat up a babysitter.” A friend’s way to opine in jest on the grinding tunes’ viciousness.

Wound Man started as the project of vocalist Trevor Vaughan and grew to play live as the foursome we know and love today. Having put on a split with Regional Justice Center and past performances with Candy, Pummel, and Show Me The Body to name a few, the crew has no shortage of street cred. I am told, though, that the recent shows will be the last ones played with the current line-up.

Looking forward, the band is set to release a new LP “Human Outline” in early 2023, something the entire subculture can look forward to. No Echo was blessed to premiere a “stripped down take” of much of the new material, which you can listen to HERE.

Fresh off a tour through Europe, the band has just released a 19-track live recording. All the proceeds from this recording will go toward Trevor’s sister’s battle with cancer. You can find this as well as prior recordings and merch on the band’s Bandcamp.

Follow Trevor on The Gram for show and support updates. Make sure to catch them live if you can.

The post Get Up to Speed on NE Powerviolence Icons Wound Man appeared first on BOSTON HASSLE.