In his memoir Eat a Peach, Momofuku founder David Chang shared the following about creating a dish:

In kitchens, we are told that a dish is seasoned properly when it’s neither undersalted nor too salty. That’s not right, I thought. The best dishes exhibit both extremes simultaneously. You want a dish that tastes too salty one moment, perfect the next, and then maybe even underseasoned after that. True balance is not an average. It is two forces in equal measures.

Truthfully, I don’t particularly find this to be true (though to my discredit, I have a palate of a six-year-old who finds comfort in high sodium intake). But in watching Mark Mylod’s The Menu, I found myself wondering if this idea was intended to be at the forefront of this dark satire about the elite class. To dine at the prestigious Hawthorn, guests must reserve a $1,250 seat. Once confirmed, they are ferried to a remote island where the restaurant and staff reside, including the famous Chef Julian Slowik (Ralph Fiennes), and partake in a multi-course dinner concocted under a mystery theme that is revealed at the end.

As it is, eating at Hawthorn doesn’t guarantee actual enthusiasm for the food among all the guests. If rich people can find a way to flaunt their greener end of the disparity gap by dropping a stack on a basic human activity without caring about said activity, they will do it. Margot (Anya Taylor-Joy) is the audience surrogate for the non-foodies or the non-wealthy; she is brought to Hawthorn by her date, Tyler (Nicholas Hoult), who is a food expert — self-taught from rewatching Chef’s Table and subsequently a walking red flag from the moment he opens his mouth (to talk or eat, it doesn’t matter). The other guests reflect the sort of mixed bag of irritating riches found on the shores of The White Lotus or on the decks in Triangle of Sadness: a famed food writer with her parroting editor (Janet McTeer and Paul Adelstein), a movie star and his PR agent looking to score some fame in culinary reality (John Leguizamo and Aimee Carrero), a few tech bros (Rob Yang, Arturo Castro, and Mark St. Cyr), and an elderly couple (Reed Birney and Judith Light), the husband of whom Margot is suspiciously avoiding eye contact with. 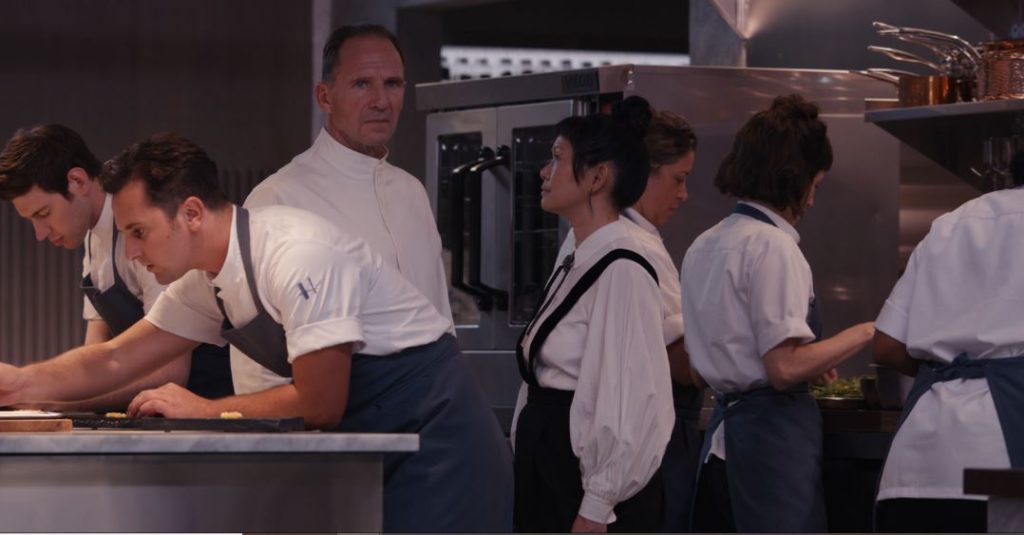 The meals are prepared in an open-concept kitchen with Chef Slowik leering — mostly at the dismissive guests (the dining room conversations also appear to be open-concept). Elsa (Hong Chau) is the maître d’ on paper, but her demeanor in herding the guests and turning down requests and deviations from the planned course play to a loyal hand in the Chef’s mission. “Be mindful, but do not eat,” Chef Slowik says in seriousness when he first addresses the guests. “Our menu is too precious for that.” If there is a scene that signals satire, it’s most likely when the guests are served a breadless bread plate (as bread is deemed to be food of the common man). If there is a scene that signals that things actually might be off, it’s most likely when the guests are later served tortillas that are laser-printed with photos of compromising integrity, such as receipts of tax fraud and snapshots of an extramarital affair. As it turns out, doom and humiliation are on the menu tonight.

We take in Mark Mylod’s vision not through his last movie, What’s Your Number? in 2011, but in his recent contributions to Succession (though I can see Anna Faris’s character from the former and Brian Cox’s character from the latter mingling at Hawthorne). The genre of watching members of the upper class, who are normally shielded from lower-class problems, flail around in survival situations has been an easy meal ticket, and suffice to say, I am still enjoying it. Admittedly, the film isn’t quite tightly sealed. Chef Slowik finds a kinship in Margot for a couple of reasons and sorta reveals his motive, which is sort of a shitgrinning flavor of “eat the rich.” However, his disdain for what his craft has become gets unfortunately muddled by his spine-straightening instinct to be a good chef at the end. One cannot be dedicated to the duties of the Grim Reaper and the cravings for excellent professionalism, not unlike the Duolingo owl. While Margot technically belongs to the Martas and Graces who are supposed to be likable, more of the memorable moments are dished out by the supporting cast. It’s a shame that we spend minutes with Chef Slowik and Margot in their sideline conversations when we can hear phrases like “It’s so thalassic” and “It’s the emoji for me” in the other room. 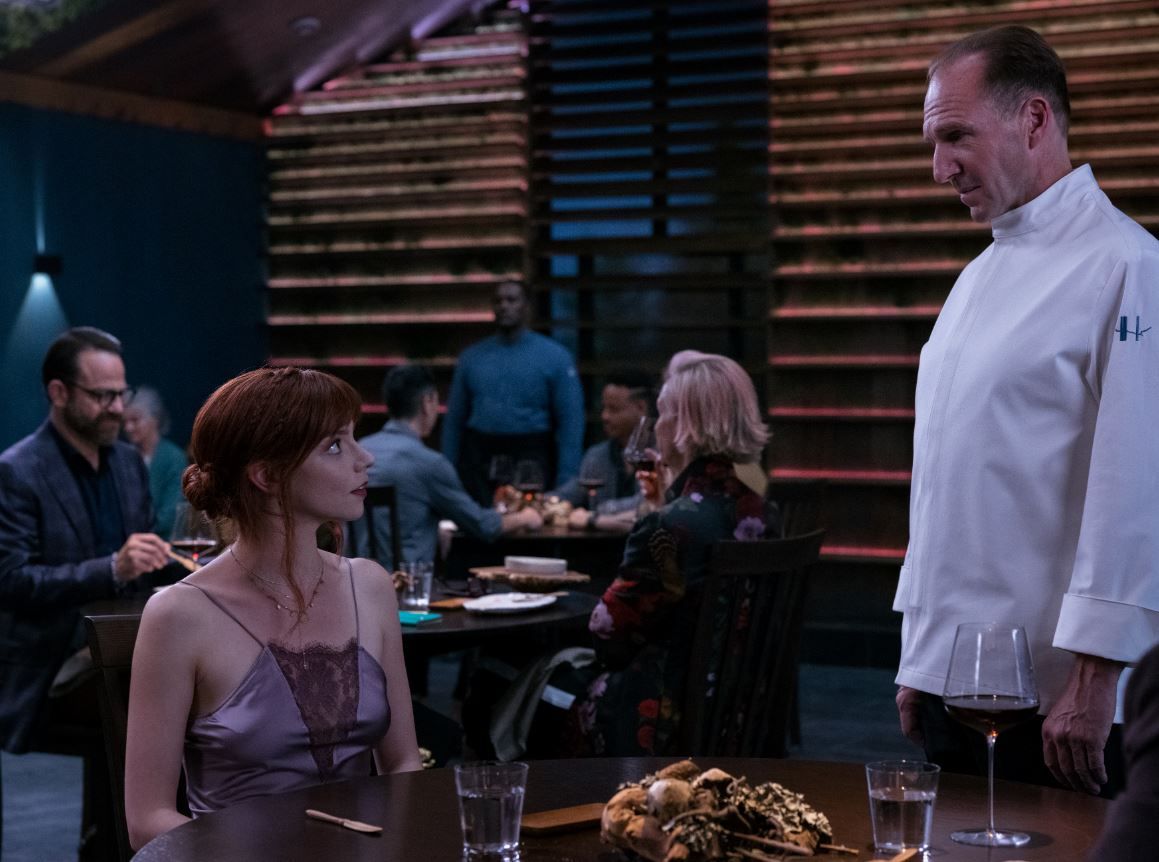 David Chang’s dish-system might not apply to satirical pieces, which I feel run the risk of needing consistency in what their making fun of. The Menu bounces between glutton-gaudy and inquisitively subtle, balls-to-the-wall ridiculous and somewhat trite. But in overcoming the expectation of a movie running on technical perfection, the film is a guilty pleasure. Even Tyler becomes amusing to watch, as he soon becomes the only guest who is enjoying his food as the rest of the room descends into chaos. The Menu takes measures to poke the withering elite-beast in good fun and even lends its time to give all the dishes a close-up Chopped-style even when the purpose of each dish boils down to absurdity.

I also feel that The Menu holds a finer appeal that is not as obvious. Per Chang, the reason why Momofuku was created was to have a place in America where the “working stiff would sit next to a billionaire” and both receive the same quality of food. The film doesn’t feel intellectually restricted to those who knows the ins and outs of fine dining. People who either frequent at a Barbara Lynch restaurant or eat a Hungry Man dinner on the regular (or, if I even dare, David Chang and I) will laugh at the demise of our guests, and I think that’s beautiful.